Written by Sam McGeown on 20/8/2012 · Read in about 2 min (308 words)
Published under VMware and vSphere
Tags: #ESX and ESXi #esxi #local #paths #storage #VMWare
This article is now 10 years old! It is highly likely that this information is out of date and the author will have completely forgotten about it. Please take care when following any guidance to ensure you have up-to-date recommendations.

If you are close to the VMware ESXi storage path limit of 1024 paths per host, you may want to consider the following: local storage, including CD-ROMs, are counted in your total paths.

Simply because of the size and age of the environment, some of our production clusters have now reached the limit (including local paths) - you see this message in the logs

In this state the hosts drop SAN LUNs because they can’t drop the locally attached storage, even though we are not using it. You can see how many paths are being used on a specific host by selecting the host, going to Configuration > Storage Adapters and selecting the local storage adaptor: 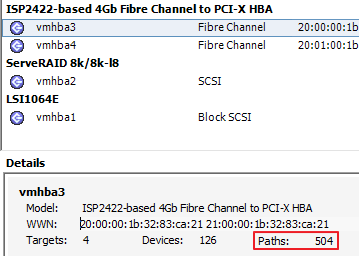 Of course, you want to avoid being this close to the limit: but if like me there are compelling requirements to be this close, make sure you factor in the local storage!