Deploying ECMP with NSX for a Provider Logical Router

Written by Sam McGeown on 31/1/2017 · Read in about 6 min (1145 words)
Published under Networking and VMware
Tags: #ecmp #nsx #ospf #routing
This article is now 5 years old! It is highly likely that this information is out of date and the author will have completely forgotten about it. Please take care when following any guidance to ensure you have up-to-date recommendations.

Equal Cost Multipathing (ECMP), for the vSphere admin, is ability to create routes with an equal cost, which allows multiple paths to the same network to be created and traffic can be distributed over those paths. This is good for a couple of reasons - firstly is availability. If we were to lose a host, and an NSX Edge, the route will time out quicker than NSX Edge High Availability - thus providing higher availability for our network traffic. Then second reason is throughput - each NSX Edge is capable of ~10Gbps throughput, but with ECMP we can have multiple NSX Edges (up to 8) providing 10Gbps each - that’s a significant performance boost.

Below I’ve mapped out what I want to build in my lab - it’s a simplification of a design I’ve used for some Service Provider customers (and you’ll see similar in the vCloud Architecture Toolkit documentation from VMware). 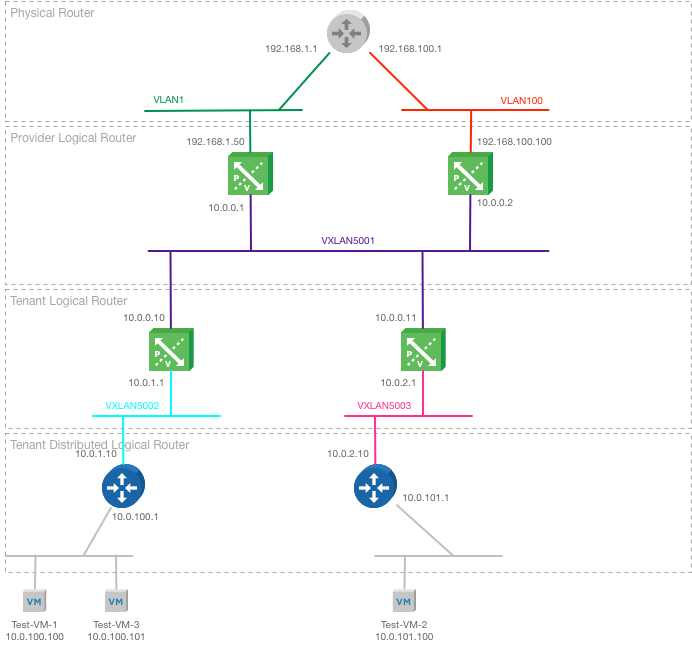 The physical router is my lab EdgeRouter-X and has two VLANs (1 and 100) connected. It’s configured for OSPF Area 0 (backbone) with an interface in both subnets VLANs.

The Provider Logical Router (PLR) provides the North/South traffic to my NSX deployment - anything coming in to or out of the NSX networks goes through the PLR. As I want to provide multiple routes in and out for scalability and resilience, I’ve got two NSX Edges deployed. For ECMP you need to configure a different VLAN for each PLR to connect to the upstream router, so one has an uplink interface to VLAN1, the other to VLAN100. Both have an internal interface to VXLAN5001, which is a Logical Switch supporting my Provider Transit Network.

The Tenant Logical Router (TLR) is the boundary of my tenant’s networks. This is deployed as an NSX Edge with an uplink interface in the Provider Transit Network and an internal interface to my Tenant Transit Network. Each tenant has a TLR, and a Transit Network that is not shared by any other tenants.

Finally, there’s a Tenant Distributed Logical Router (TDLR), which has an uplink interface on the Tenant Transit Network, and as many Tenant Networks (Logical Switches) as are supported - that’s slightly less than 1000 networks. The TDLR is required for scalability purposes, as the TLR is an NSX Edge and limited to 10 vNICs. 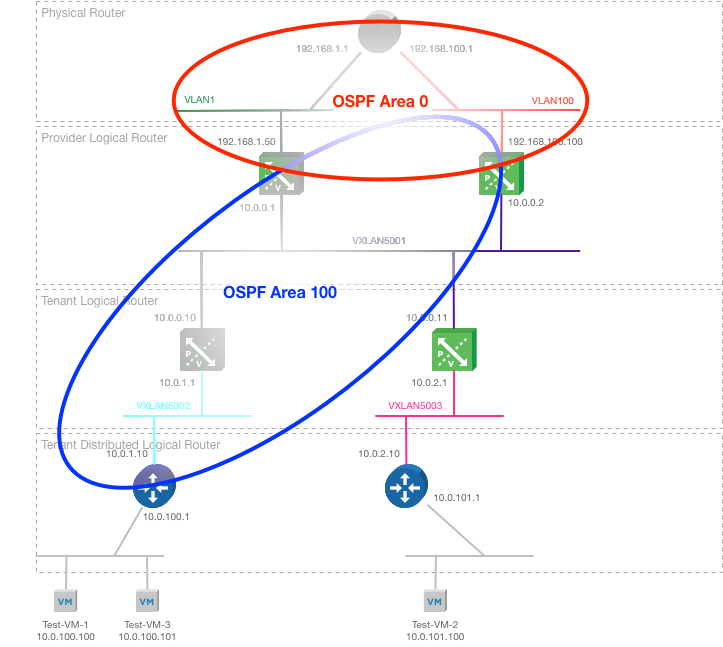 I have pre-deployed the Logical Switches required for this testing:

Obviously the physical router configuration is going to be different depending on what physical upstream router you’re using. In my lab I have the very capable Ubiquiti EdgeRouter X, so I configured this with interfaces in my two VLANs (1 and 100) and configured OSPF Area 0. As per the diagram above, the ERX has two addresses, 192.168.1.1 and 192.168.100.1.

At this point, there are no OSPF routes configured, so the EdgeRouter only knows about some connected, and some static routes.

The first NSX Edge (PLR-1) is deployed with an uplink in VLAN 100 and internal on the Provider Transport network.

Under Global Configuration you can see that the default gateway is the physical router interface on VLAN 100, and that OSPF is enabled. In the OSPF settings, Area 0  is configured, and an Area to Interface Mapping links Area 0 to the Uplink. Area 100 is configured and mapped to the Internal interface. Under Route Redistribution, you can see that any Connected network (as well as OSPF learned networks) will be redistributed. 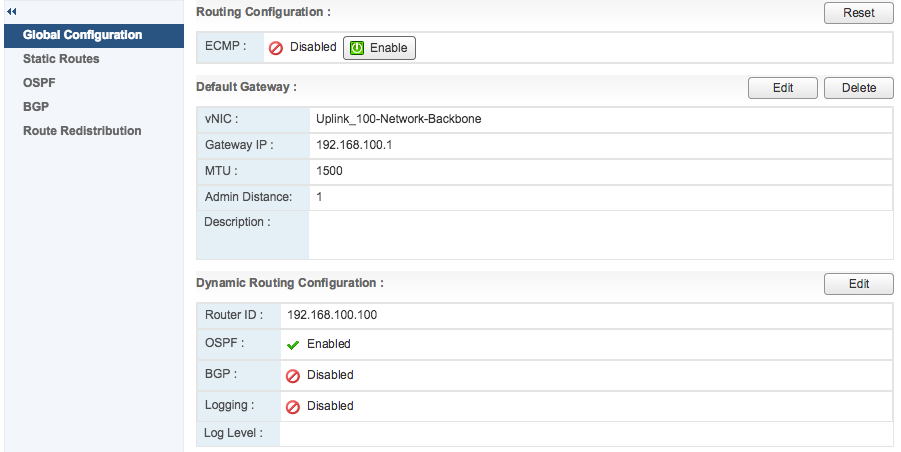 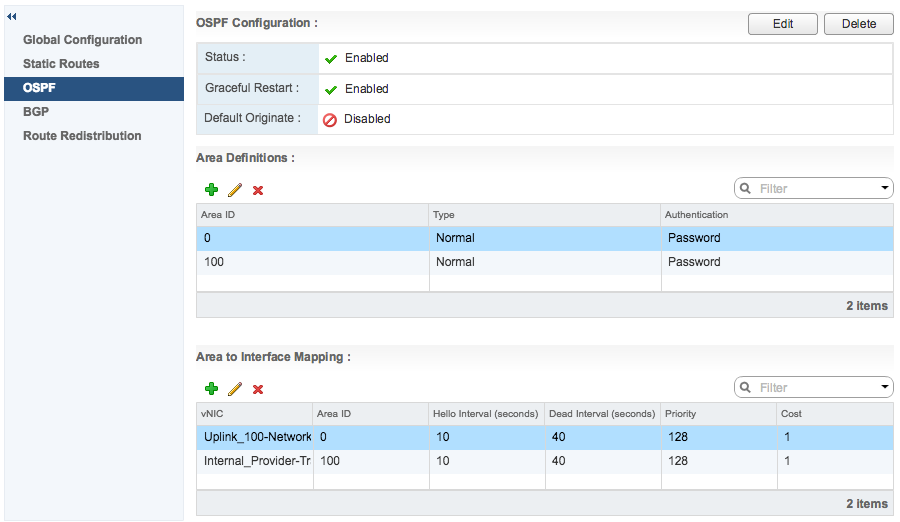 On the PLR-1 console, you can view the OSPF neighbours and route table to verify that the physical router is a connected neighbour:

At this point, I’ve deployed just the one PLR NSX Edge, and both the Physical Router and the Provider Logical Router know about the connected networks. 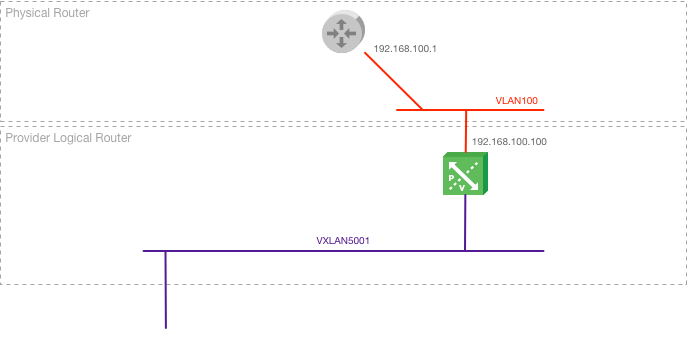 The second NSX Edge in the PLR (PLR-2) is deployed in the same way as the first, except this time it uses the second VLAN to talk to the upstream router. When it’s configured you can  the output of the physical router’s “show ip ospf neighbour” and “show ip route” commands. 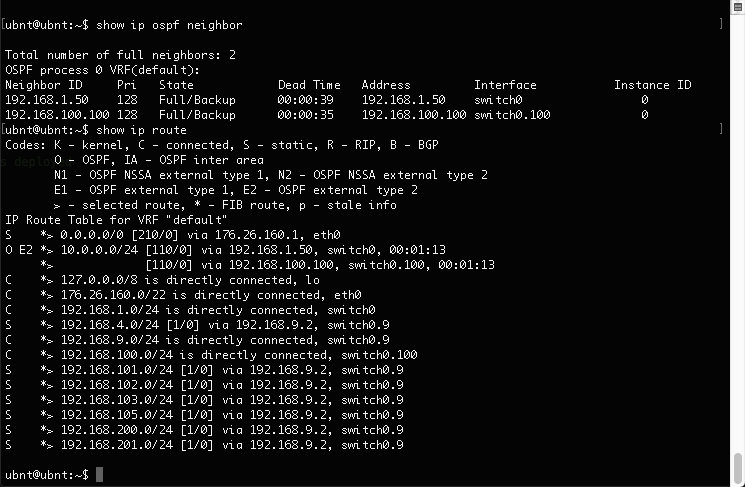 So, now on my diagram you can see that I have deployed the second PLR, and that they are all aware of the connected networks. 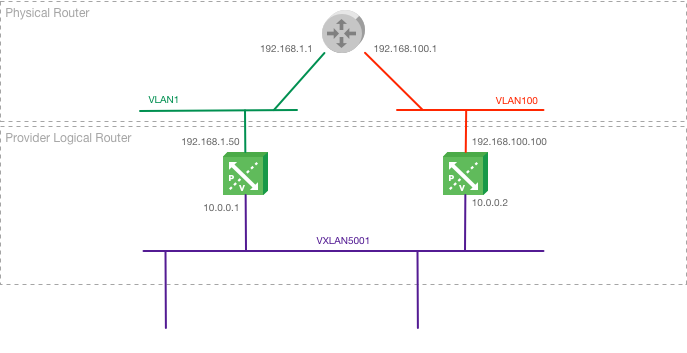 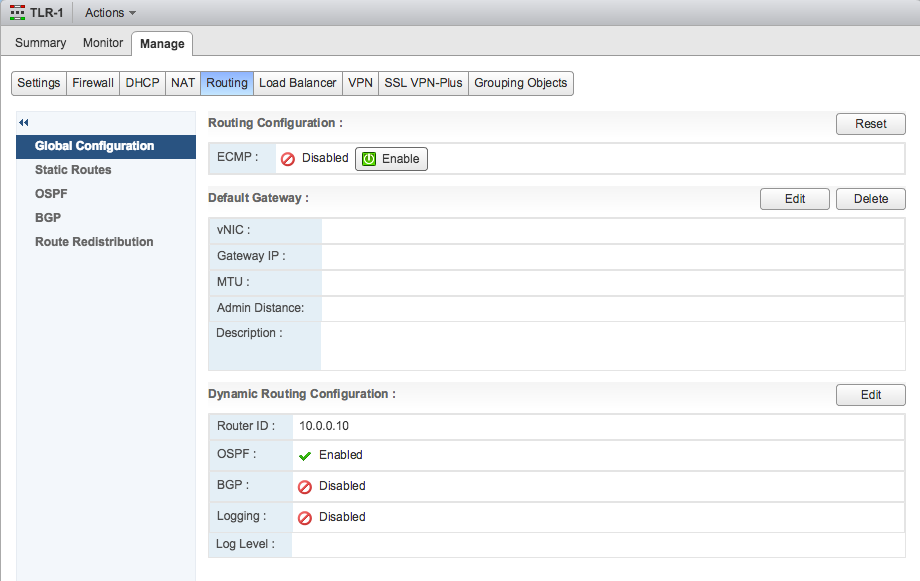 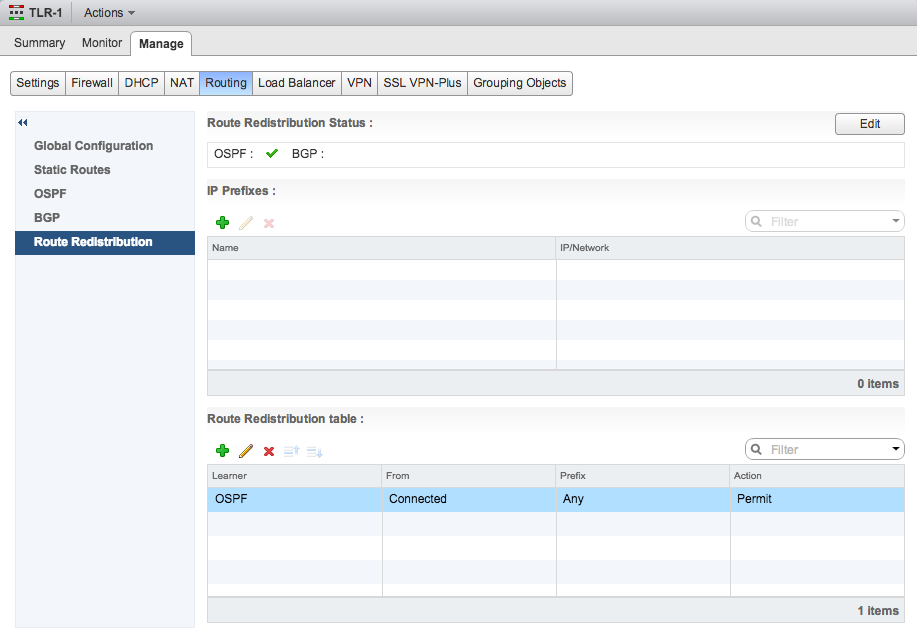 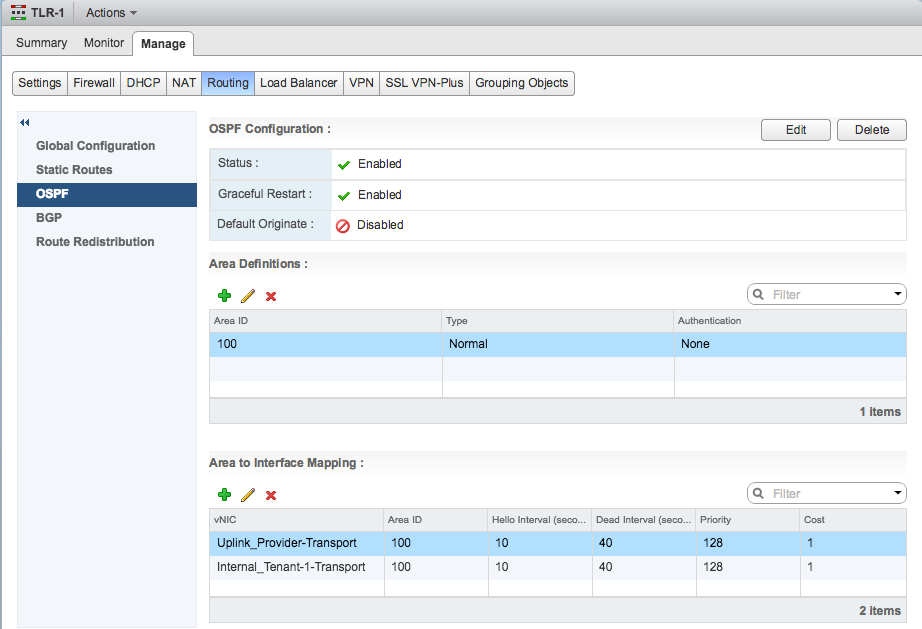 With this configured the physical router learns the following routes: 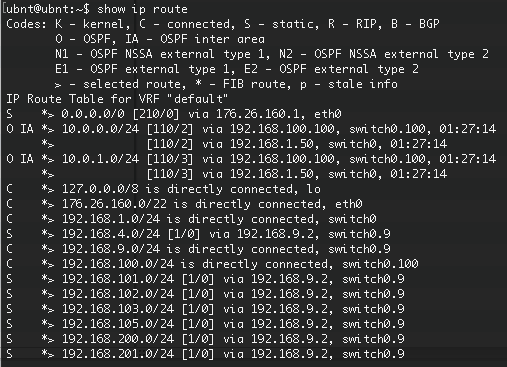 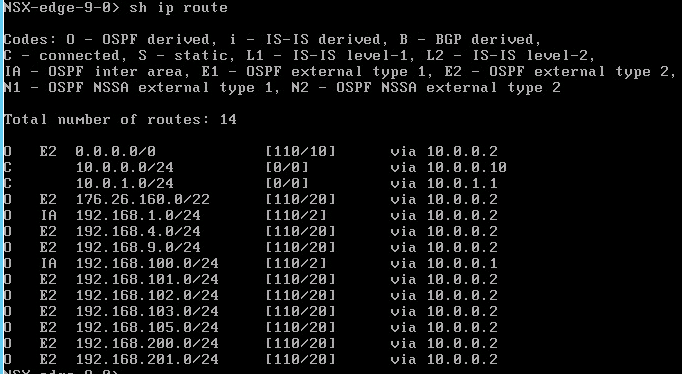 The Tenant Logical Router has learned the routes from OSPF but will only show one route per network. 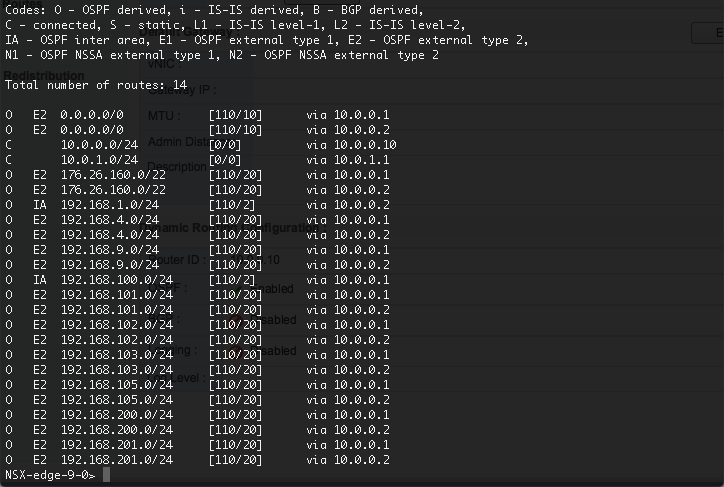 With the ECMP routes enabled on the physical router and the TLR, traffic can now flow in both directions through the Provider Logical Router NSX Edges. 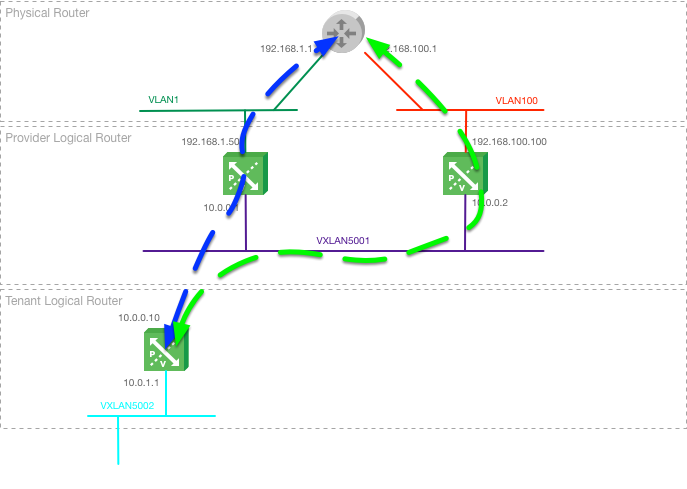 The remainder of my lab build is simple, I deploy a Distributed Logical Router for the tenant, which is configured with it’s uplink in Area 100. It also has an interface connected to a Tenant Network, which is a VXLAN I’ve deployed my VM (Test-VM-1) on. 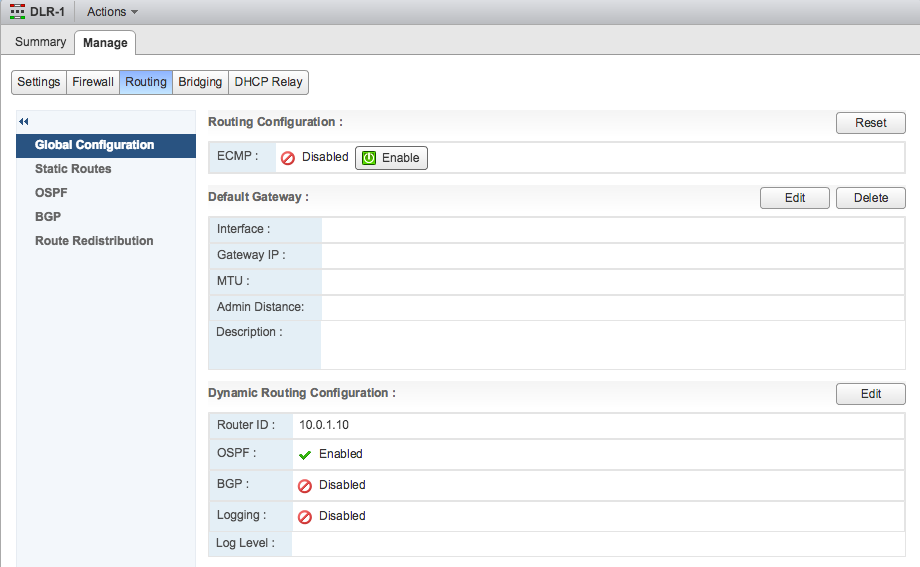 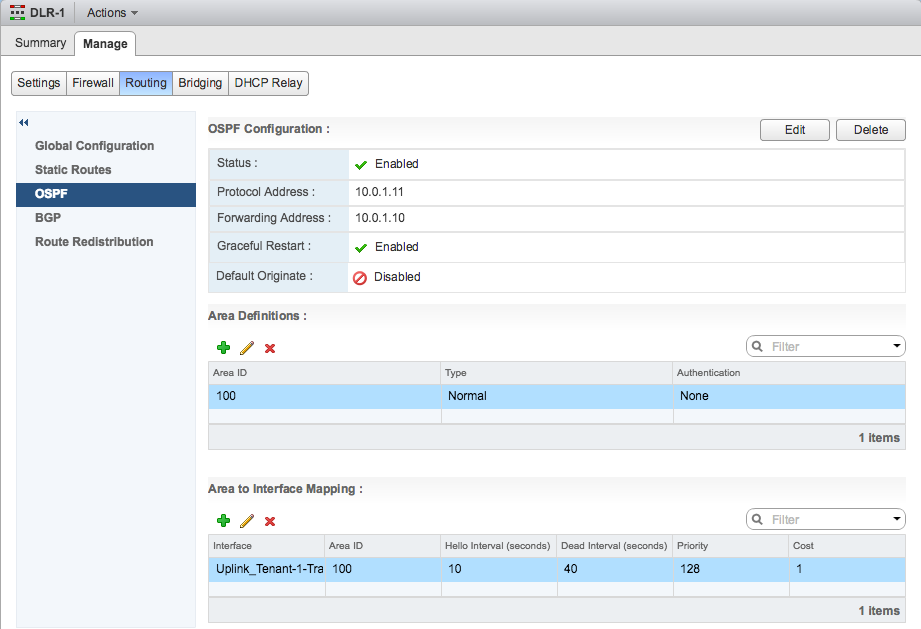 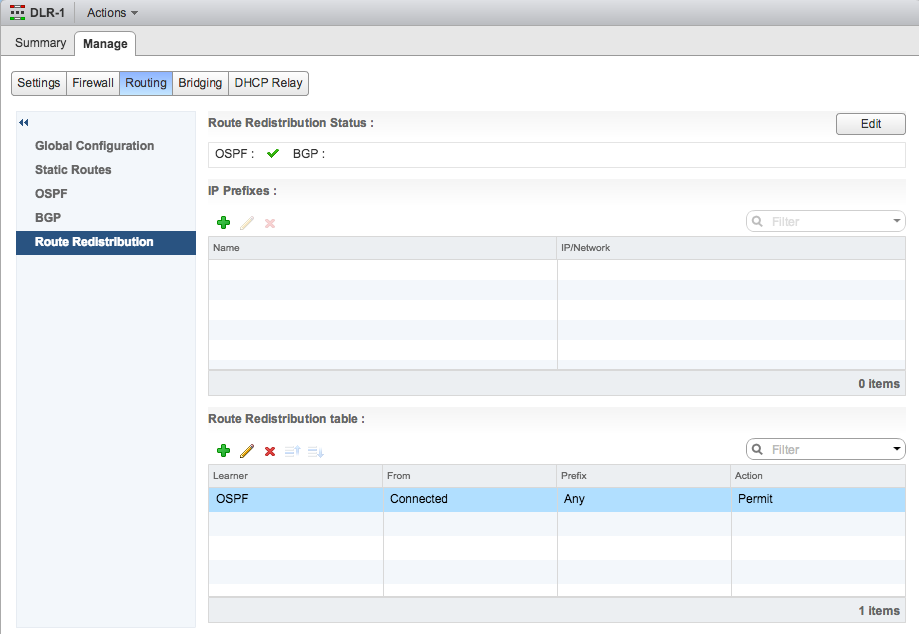