Written by Sam McGeown on 19/1/2018 · Read in about 15 min (3154 words)
Published under NSX, VMware and vRealize Automation
Tags: #Automation #design #micro-segmentation #nsx #vRA #vRA 7.3 #vRealize Automation
This article is now 4 years old! It is highly likely that this information is out of date and the author will have completely forgotten about it. Please take care when following any guidance to ensure you have up-to-date recommendations. 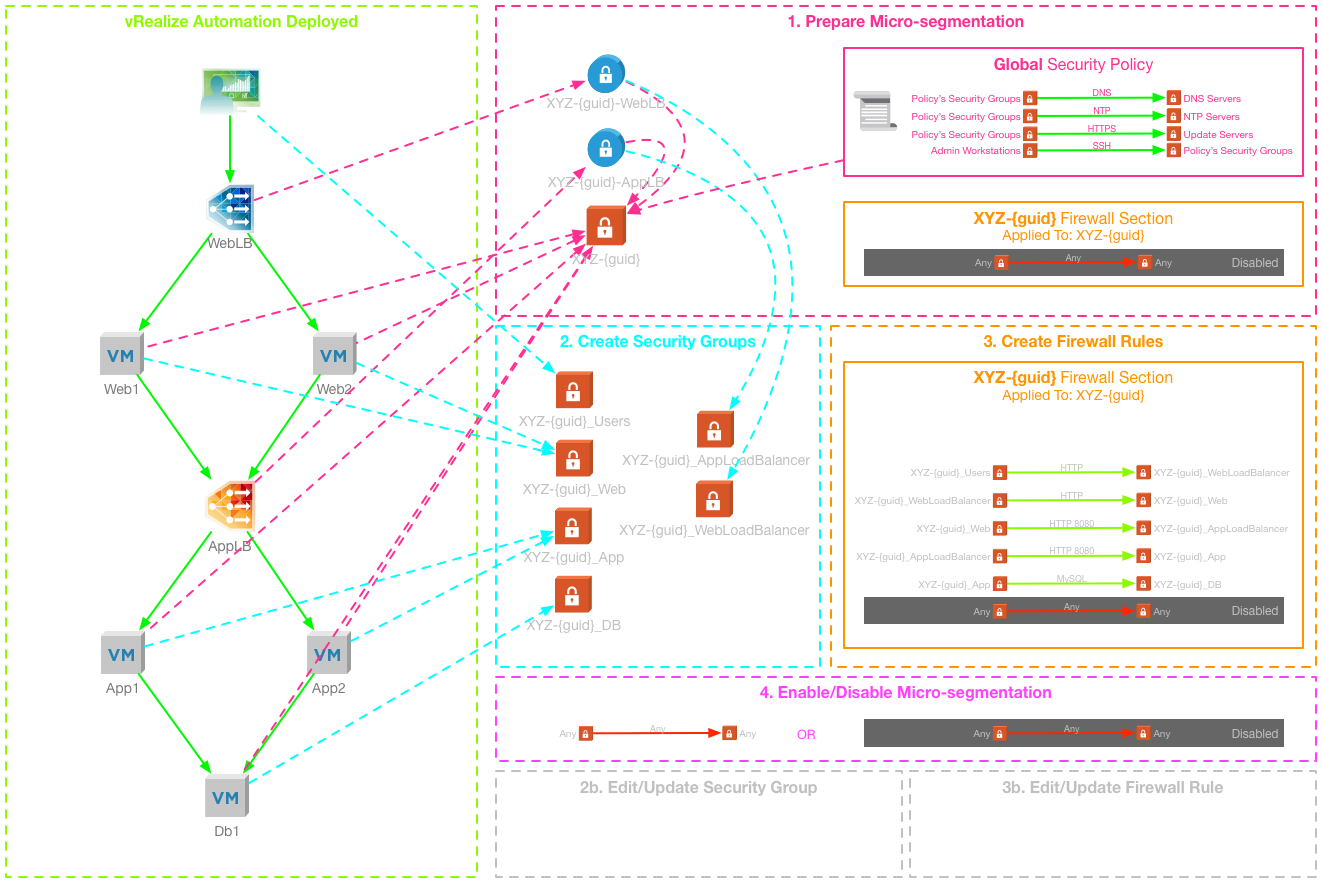 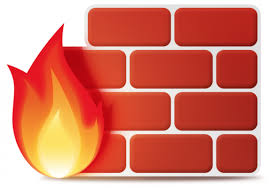 vRealize Automation and NSX integration has introduced the ability to deploy multi-tiered applications with network services included. The current integration also enables a method to deploy micro-segmentation out of the box, based on dynamic Security Group membership and the Service Composer. This method does have some limitations, and can be inflexible for the on-going management of deployed applications. It requires in-depth knowledge and understanding of NSX and the Distributed Firewall, as well as access to the Networking and Security manager that is hosted by vCenter Server.

For customers who have deployed a private cloud solution using vRealize Automation, an alternative is to develop a “Firewall-as-a-Service” approach, using automation to allow authorised end users to configure micro-segmentation. This can be highly flexible, and allow the delegation of firewall management to the application owners who have intimate knowledge of the application. There are disadvantages to this approach, including significantly increased effort to author and maintain the automation workflows.

This blog post describes two possible micro-segmentation strategies for vRealize Automation with NSX and compares the two approaches against a common set of requirements.

This post was written based on the following software versions

These are some generic considerations when deploying micro-segmentation with vRealize Automation.

For illustration purposes, an example 3-tier application deployment is shown below “Application XYZ”. It consists of a Web, App and DB tier and a load balancer for the Web and App tiers.

The communication required for the application to function correctly is defined in the table below. To achieve micro-segmentation, there is a default “deny all” rule at the bottom. This ensures that any traffic not explicitly allowed by the other rules, is denied. The application end users must be specifically allowed access to the front-end Web Load Balancer. There is also a set of infrastructure or global rules that will be applied to each server, allowing access to infrastructure services such as DNS, NTP and software repositories, as well as allowing administrator access to the servers.

In my examples below, the application is deployed with an on-demand routed network that is backed by an NSX Logical Switch, however it should be noted that the underlying network will not affect the micro-segmentation strategy. This can be implemented on existing VLAN backed networks, on multiple routed or NAT networks within a single deployment.

Configuring micro-segmentation to be deployed as part of a blueprint and using the existing vRealize Automation integration requires the use of pre-created Security Groups and Security Policies. If an application’s network rules are well known at authoring time, is unlikely to need to be changed, and is likely to be deployed many times, this method may be a good fit.

Because this method pre-defines the micro-segmentation for an application, it has the advantage of being able to be pre-approved by a security team (if required) before being published.

The diagram below, visualizes the strategy that will be employed to meet the micro-segmentation requirements for this particular application when deployed by vRealize Automation using out-of-the-box integration only. 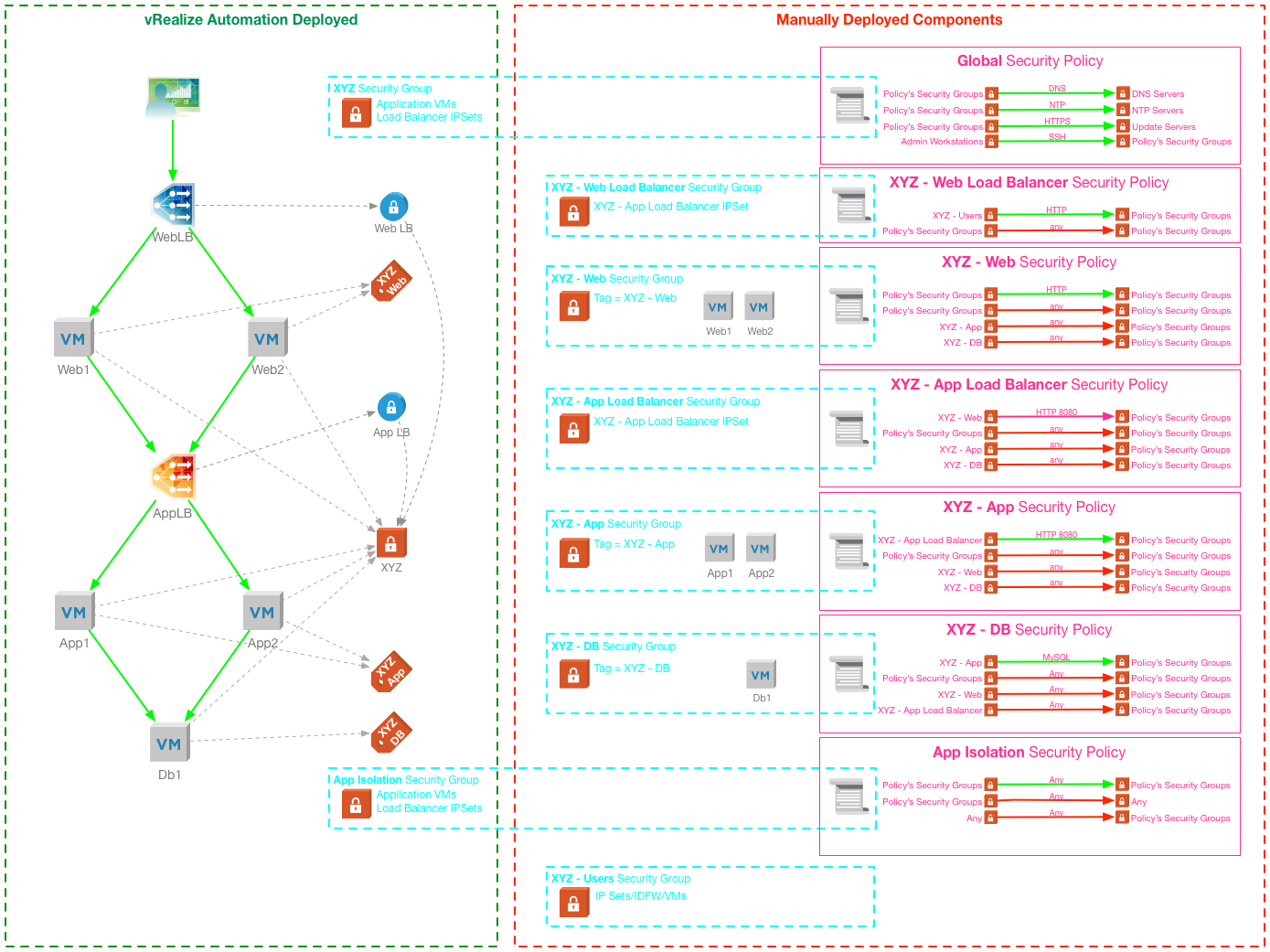 Based on the out-of-the-box integration with NSX, vRealize Automation can deploy the three tiers connected to a single on-demand routed network, with the load balancer contexts on a single ESG. On top of that we can attach an on-demand Security Group (to provide the unique “deployment Security Group”) which is associated with the Global Security Policy (providing the “birth-right” infrastructure rules for VMs). We can also tag the VM tiers with existing Security Tags, allowing dynamic inclusion into tier-specific security groups.

The following settings and components must be pre-created:

The Security Tags and Groups to manage the intra-tier communication must be pre-created prior to deploying the blueprint. The application tier Security Groups dynamically include the relevant Security Tag.

The order that the Security Policies are configured is important, as the firewall rules of lower ranked policies will be processed before higher ranked ones.

Enabling App Isolation for the blueprint ensures that a default policy isolates the deployment by creating an App Isolation Security Policy which applies some default firewall rules.

Configuring App Isolation on a Blueprint

To enable the global infrastructure rules, an on-demand Security Group is added to the blueprint and associated with the “Global” Security Policy, which defines the rules which will apply to all servers in the deployment. Different Security Policies could be used for particular environments (such as Production, Development etc.) or for specific Tenants or Business Groups.

The Security Tags that were pre-created for each tier are added to the blueprint: when VMs are deployed from each tier they will be tagged with the appropriate tag, and can be dynamically included into a Security Group.

When the blueprint is deployed by vRealize Automation, the following is configured:

Virtual Machines tagged and included in each tier Security Group 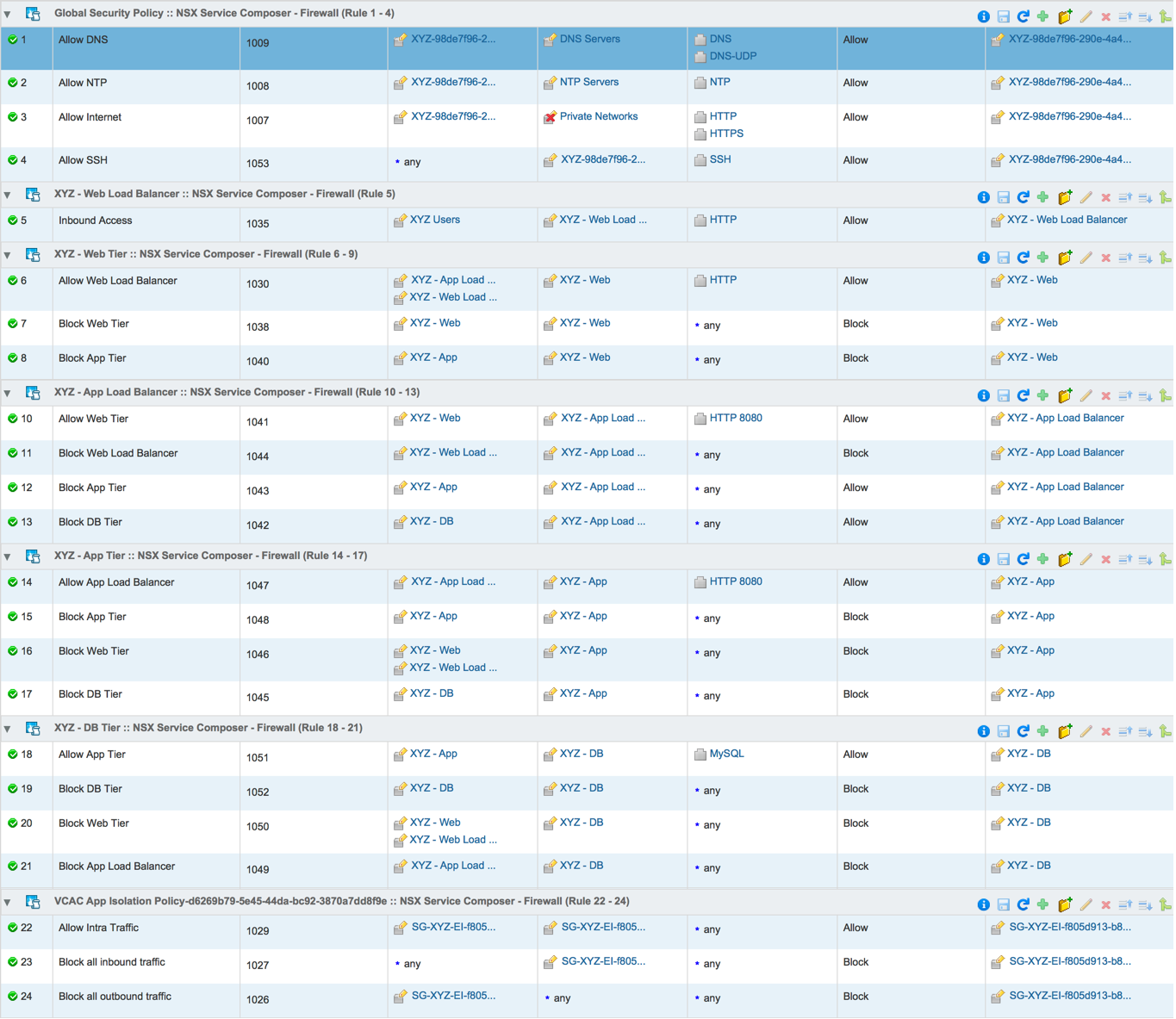 Manual/Automation steps to complete the solution

To complete the solution and meet the Application XYZ firewall requirements, the following step needs to be completed, either manually or through automation:

Using just the out of the box automation has an issue, allowed traffic between tiers is not segmented when the blueprint is deployed multiple times - strictly speaking it is not micro-segmented because there is nothing preventing, for example, the Web tier servers in Deployment 1 acccessing the App Load Balancer in Deployment 2. This can be easily mitigated using Edge Firewall, or additional Distributed Firewall rules, just not using the ”out-of-the-box” integrations. 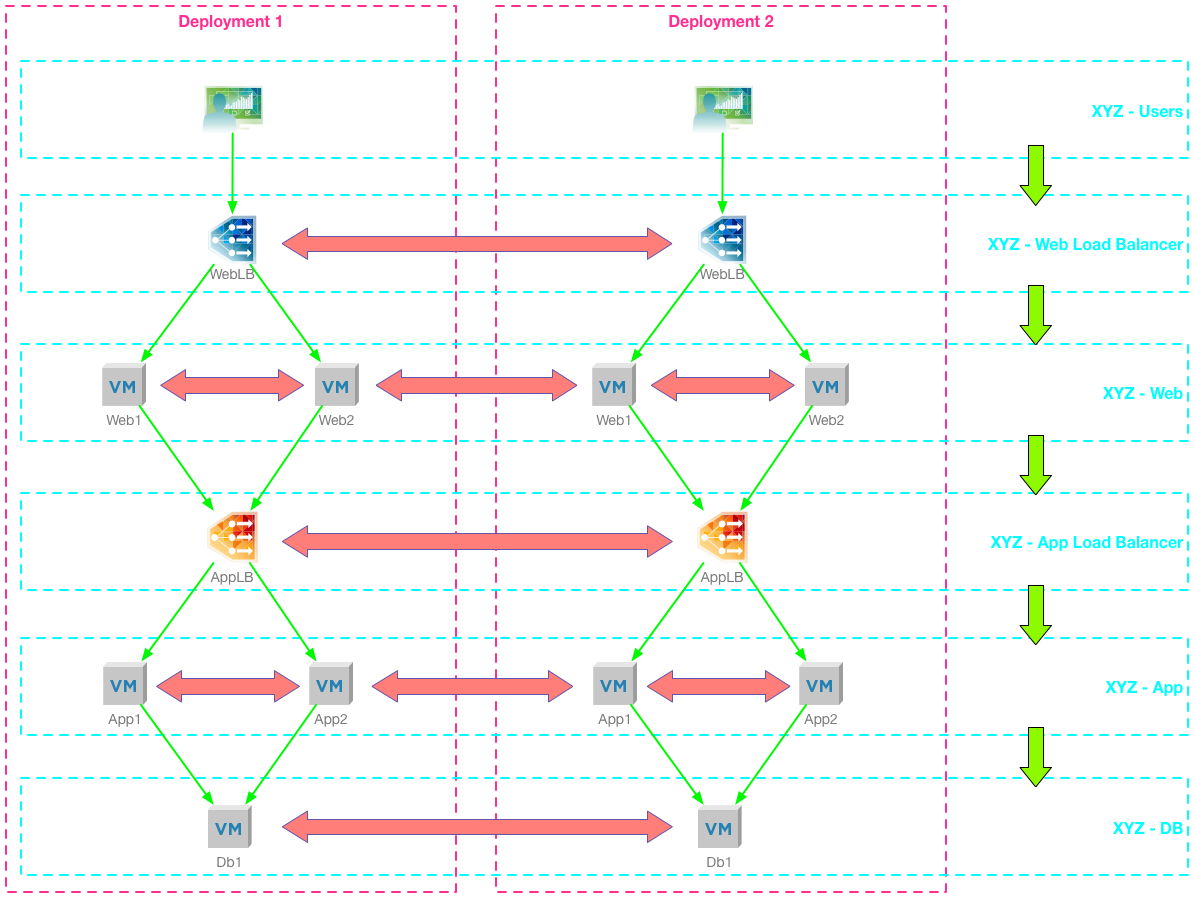 This approach has the advantage of being flexible, each deployment can be configured with unique firewall rules and those rules can be reconfigured at any point without affecting other deployments.

The automation workflows detailed below would enable a “minimally viable product” for authorised end users to configure micro-segmentation for a deployment.

Example Actions configured on a Deployment

A Security Policy needs to be manually created, with Firewall Rules defined to allow access to infrastructure services. To ensure that the firewall policies are placed above the rules deployed using resource actions, the Security Policy should be configured with a high weight (under Advanced Options).

This action sets up all of the components for the micro-segmentation.

This action creates a new firewall rule at the top of the deployment’s distributed firewall section. It can be run many times to build up the rule sets and uses the Security Groups created by the previous workflow, as well as other pre-existing Security Groups.

This action toggles the default Deny rule between enabled and disabled.

In addition to the automation required for an MVP, the following functionality would be required to allow an end user to manage the micro-segmentation and enable “firewall-as-a-service”

In order to facilitate the scale in and out of deployments the Prepare Deployment for Micro-Segmentation workflow would need to be run again, this would ensure all components are added to the Deployment Security Group. In addition to this, the components would need to be added to the relevant application tier groups using the edit/update functionality described above.

Using the Event Broker to subscribe to the Deployment “Destroy” operation the “Remove Micro-segmentation” workflow can be triggered to clean up any created NSX objects before destroying the deployment.

The distributed firewall strategy should be applied consistently, whether it’s implemented at deploy-time through the vRealize Automation blueprint and XaaS components, or implemented as a day 2 actions. However, there are advantages and dis-advantages to both methods. There are undoubtedly many variations of these two strategies, and in reality a mixture of both are likely to be required. Careful planning and testing should be carried out to ensure the outcome matches the requirements.

Comparing “out of the box” and Day 2 micro-segmentation

Below is a non-exhausive comparison of some of the advantages and disadvantages of these methods.